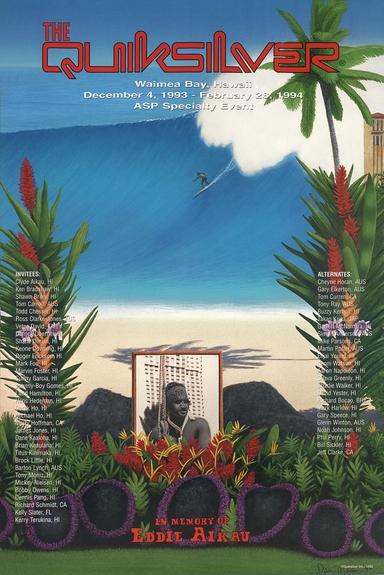 A message from Dan:

In 1991, Quicksilver, the sports clothing company, asked me to paint the Waimea Bay Surf Contest poster. They told me the story of Eddie Aikau, the inspiration for the contest. He was a champion surfer and the first lifeguard at Waimea Bay, who saved over 500 lives.

In 1978, the Polynesian Voyaging Society sought volunteers for a 30 day, 2,500-mile journey to follow the ancient route of the Polynesian migration between the Hawaiian and Tahitian island chains. Eddie Aikau volunteered to go on the double-hulled voyaging canoe, Hokulea. It developed a leak in one of its hulls and later capsized about 12 miles south of Molokai.  Aikau volunteered to paddle his surfboard to Lanai to get help. Eventually, the Coast Guard rescued the other 29 survivors but Eddie was lost at sea, never to be seen again.

To this day, most cars in the Hawaiian islands have the bumper sticker “Eddie Would Go”.

I had never done an acrylic painting before but had to depict this Hawaiian hero and the most famous surf contest in Hawaii.

Just recently, I found the transparency of the original art and decided to print a limited edition of 50, 24” x 16” giclees on canvas of this vintage surf contest poster that look very much like the original and you can frame them as you would an original. They are available only on this website for the wholesale price of $195.00 including shipping in the U.S.